Case study: how a cyberstalker launches an assault on Twitter?

The female cyberstalker based in Hussaini, Gojal, Pakistan, is involved in a Twitter assault against a lady living in Lahore. As usual, she used a Twitter ID made from the name of another target, Bernard Grua, she hijacked. https://twitter.com/GruaAbuseArkive/status/1215206561301303296. It is of importance to know that the target NEVER tweeted about her tormentor and also never answered to her. This malicious long-term misconduct deserves attention while it presents a complete presentation of the different methods used by stalkers.

The thread of January 9, 2020, see screen captures in § 7, was commented on Twitter https://twitter.com/StopWebStalkers/status/1215623617385574402 as a relevant example of the stalker habits. The  commenting eight tweets are presented below. Sub-titles have been added for clarification.

Here are 36 tweets sent in two hours against the same target. This neurotic exhibitionism can evidence why it is so difficult for normal people to face a pathologic stalker without psychology &/or psychiatry education. 1/8
#RamlaAkhtar

A ranting monologue presented as a dialogue

A demonization of the target and a humiliation attempt

Observe how, in a first step, the stalker made her best efforts to present a respectable image (though exceeding the decency borders for any normal person) of herself as a better counter-mirror of her self attributed enemy from whom she will build, in a second step, a detestable virtual personality. 3/8
#CyberBullying

Look how the stalker uses some actual elements and some part of the life of her target to post her own distorted presentation and to support her tale. There is a kind of consistency in this freak «demonstration » that may abuse naive readers especially if they emotionally react to victims, people in distress, as Akhtar is used to present herself. 4/8

Have a review on the last 10 tweets showing how the stalker get trapped in her speech reaching a dementia level of excitation. This is a flood of slang and insults showing clearly who is the actual victim. It can also be a semi-conscious provocation.   5/8

One purpose of repeated insults is to provoke exaggerated responses. The stalker makes screenshots of them, claiming being harassed, terrorized & physically threatened. Of course, the aggressor just shows the answers not her repeated unacceptable provocations, like below where she even blacked her words.  6/8

A tormentor disguised as a victim

After such a provocative «rain dance» the stalker is ready to promote herself as a victim, an icon  of the difficult women condition, shameless hijacking this noble cause for her personal death & hate pulsions. 7/8

Instrumenting God for her dirtiest "works"

Eventually, it is also possible to observe, as we got used to, that the dirtiest is the stalker and the highest are her lies, the most she invokes the Almighty in order to get her words being a matter of faith and not a rational demonstration. This is how she bypasses questions of readers.  8/8

The stalker, due to the details she gives, is clearly doxxing her victim. She makes also sure her defamation could harm professionally this person (see #farmersMarket) and rich her victim friends. She threatens her victim in order to forbid her to talk to other victims.
We already observed that this stalker tries to bargain, with @bernardgrua, the partial end of her stalking against the removal of all the evidences of her abuses. It might be one of the reasons of her assault against this lady who is a key witness of the stalker's child maltreatment.
Like many other stalkers she invokes justice but never file any complaint since 6 months she started her bullying. She, thus, confirms having no particular plans except having fun and satisfying her cranking libido in tormenting people, thanks to Twitter's permissiveness. Because of her unbearable personality, of her sentimental failure and of the repulsive result of her physical deterioration caused by her bulimia, these are probably the only quasi-sexual emotions that she is able to experience. That would explain her mephitic addiction and her suicidal determination to cause harm.

Following countless malicious publications on Facebook since May 2019, Ramla Akhtar launched her Twitter attack on September 24, 2019. She started with hastags.

Debunking all the stalker's fable would be boring for the readers. Some highlights might however be helpful to make an independent opinion about this case.


The stalker pretends she "helped", in the past, her target. Actually, she made one post in a Facebook public group. It was probably to attract attention of someone more important than her. This is what she is, nowadays, doing on Twitter. She is following five times more users than she has followers (536 Following, 106 Followers). Retweets, most of the time with no added value, also represent 46% of her posts.

Me, Bernard Grua, I never had any contact written or oral with the stalker's target. The only time I heard about this lady was thru anonymous comments below this report. I have no idea about the people who wrote these comments. Make no mistakes! If I would have had some contacts with the lady targetted by this female delinquent, I would have no problem to disclose it. Then what this cybercriminal pretends being a "partnership", between me and her target, is just bullshit.

This is a hatespeech developped by the stalker against an ethnic and religious minority of the north Pakistan mountains. See: "Report of a French traveler about the Chapursan Valley, Pakistan." 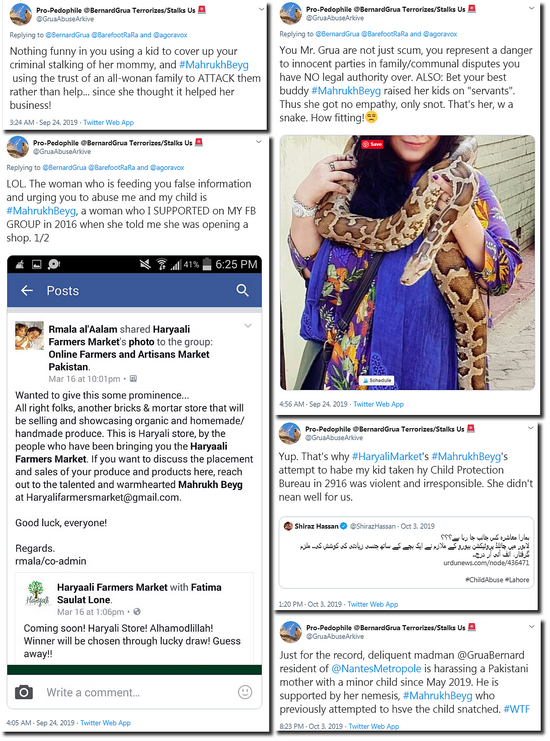 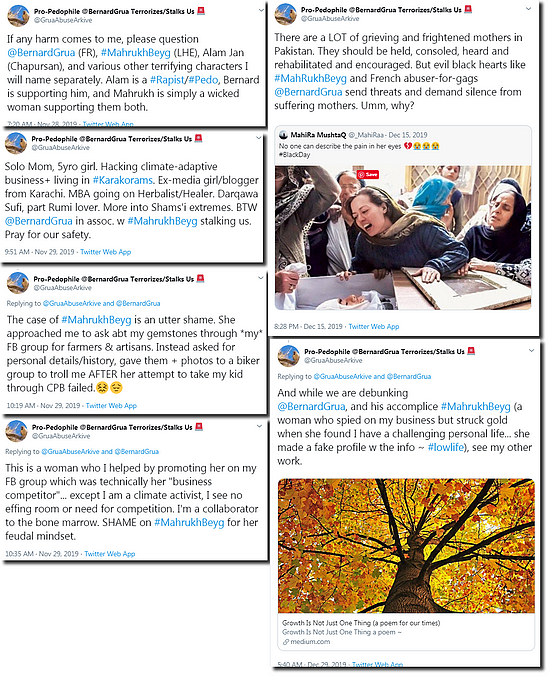 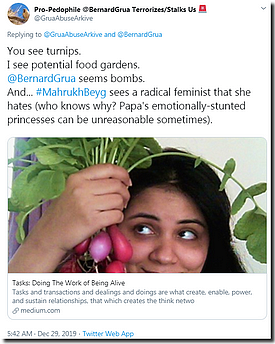 Eventually, the tormentor found the Twitter ID of her victim. She started to use it. Showed as a pseudo dialog the stalker rewrites the history of her victim to discredit her. Akhtar also tries to requalify the abuse she made on her daughter, whose torture she posted, in a night of delirium, on Facebook, and which caused a police intervention. In this attempt, she chronologically mixes the facts. See also the testimonies collected here: Is Rmala Aalam guilty of maltreatment against her child? 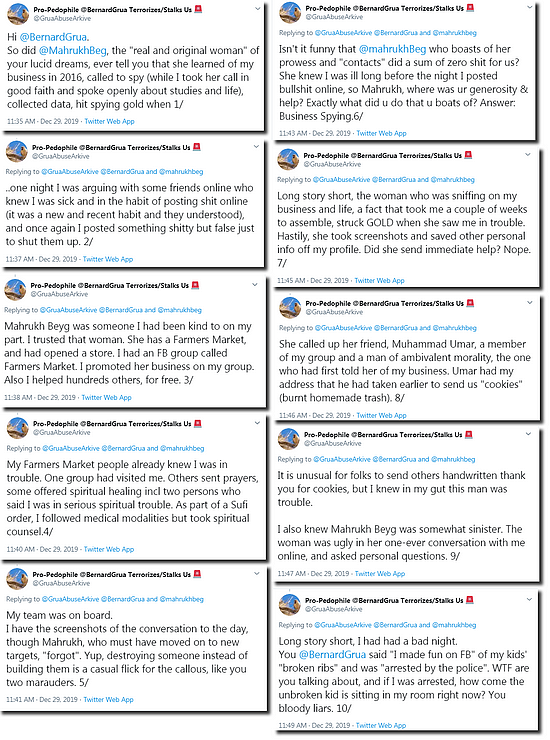 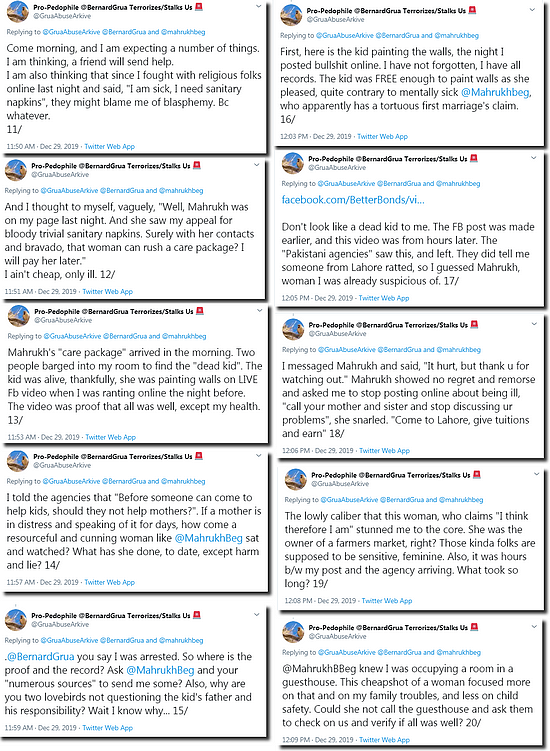 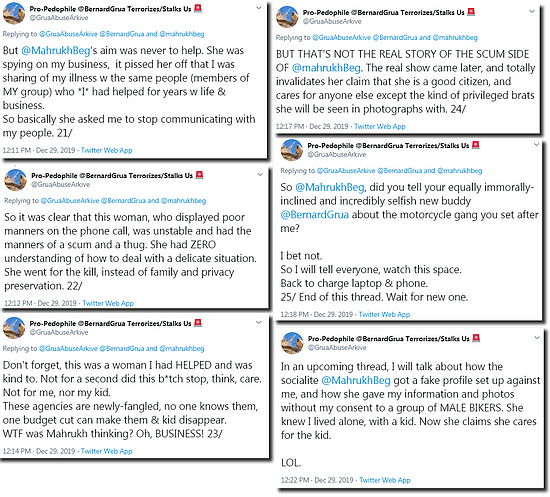 This is just the usual indecent ranting of the stalker on Twitter. It look like the expression of her obsessions and her despicable loneliness on New Year Eve. 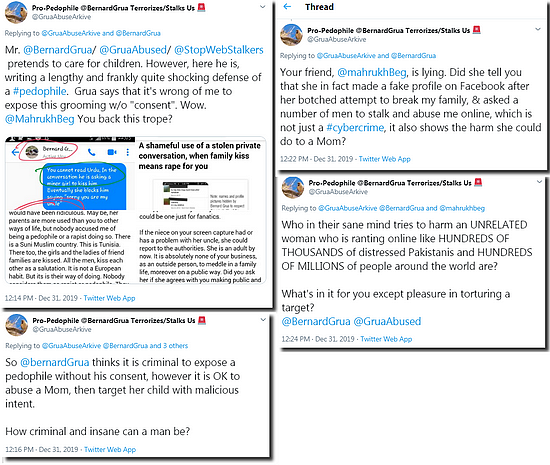 The same monologue dressed as a dialogue to depreciate the human value of her target. It is a patchwork of resentment, not constructed, that haunt a sick mind. 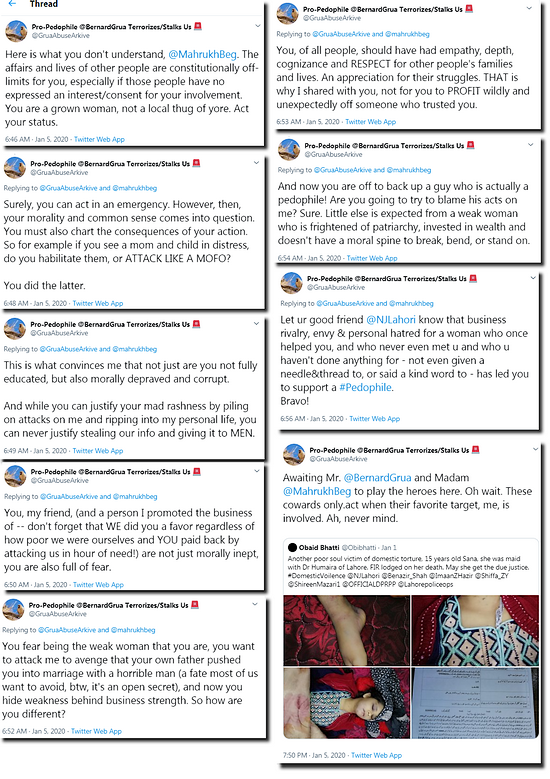 7. The final (?) bouquet of the fireworks

This long thread was supposed to be the end of the target's story according to the tormentor. It was commented above on Twitter. See § 1. 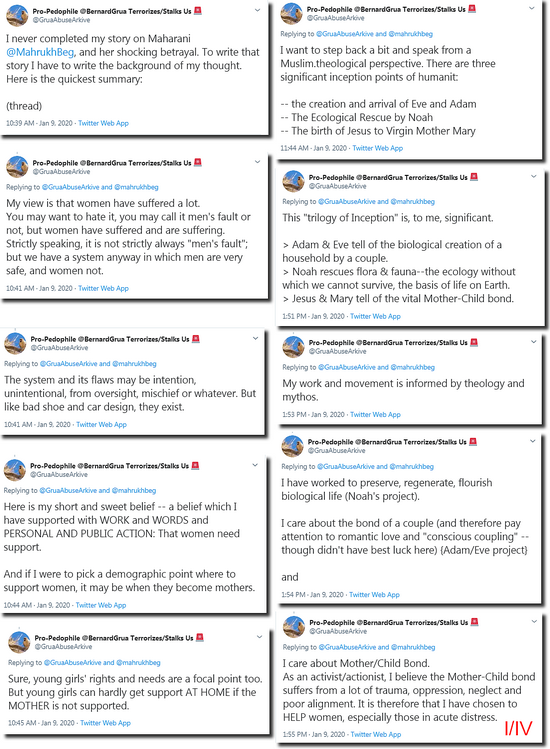 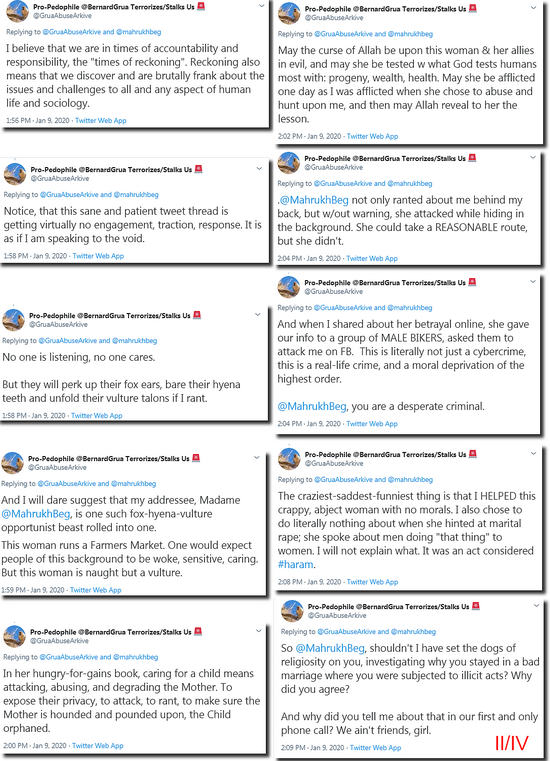 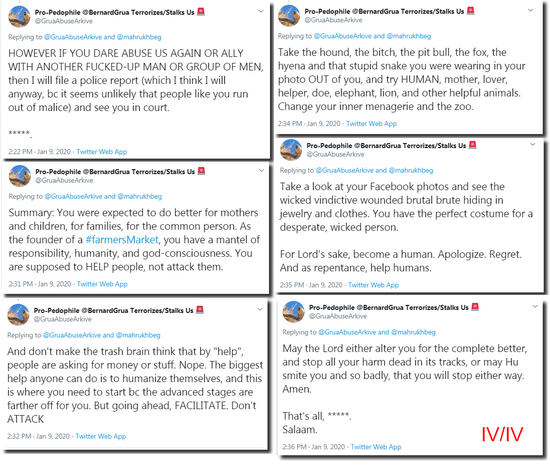 8. It will never end

In contradiction with her "...Amen. That's all, ****.  Salaam." The tormentor comes back like a rabid dog whose mission is to bite. Akhtar is so possessed by her hallucinations and her pariah status that she cannot stop publicly exposing her neuroses. This woman cannot find meaning in her life other than confrontation. We are, indeed, in front of a psychopathic stalker and not only a mere troll. 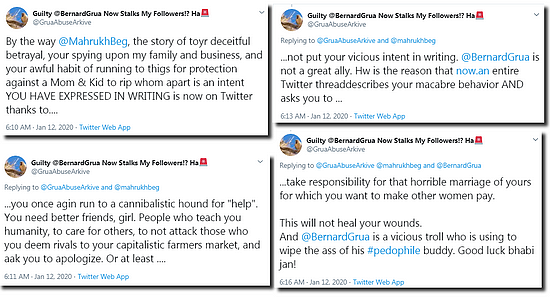 9. Summary of stalking tweets against the target as of January 12, 2020 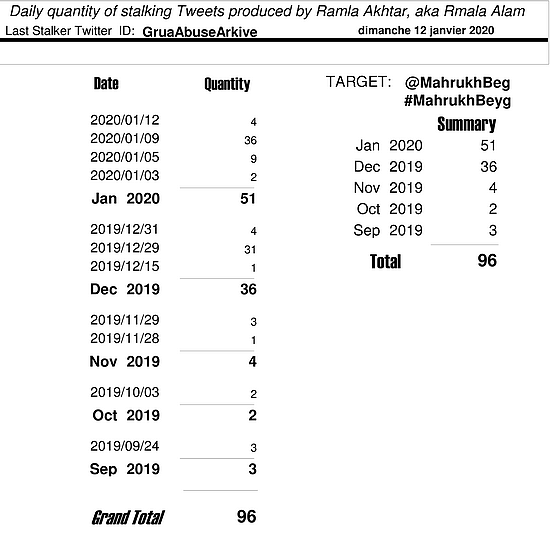 Slandering on Twitter became a drug for Ramla Akhtar. Her tweets are the result of a wasted life, of a desperate quest for attention, of her narcissistic exhibitionism and of her psychopathy. Later, Akhtar, might find better targets, especially if she can attack someone whose answers could be presented as threats, but her stalking will never end. It can become even worst in coordination with the deepening of her mental wreck and social alienation.

There is a lesson to be taken from this case. "Don't feed the troll" does not work with a psychopath. The target sent absolutely no tweets to her tormentor. However, she got as of January 12, 2020, almost 100 sewer tweets dumped on her head.  Obviously, nothing usually recommended against stalkers works in this case. Because the cybercriminal lives in Pakistan, she cannot be caught by French justice despite her actions would deserve jail in France for her 720 tweets on me, Bernard Grua.

Something new has to be found to make sure Ramla Akhtar's stops her malicious hate speech on Twitter. Probably, the solution could be her parents who provide the money for her living.They actually pay her for being full time ranting behind a keyboard instead of working.

Last but not least, everybody who has been able to read all what is presented above may understand that a little girl, the five years old daughter of the stalker, cannot be safely raised in such a mad environment. 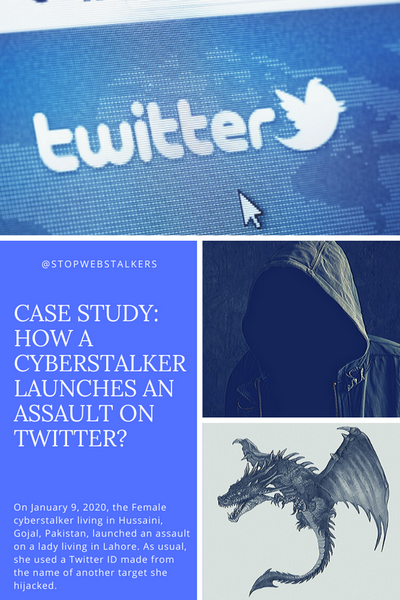 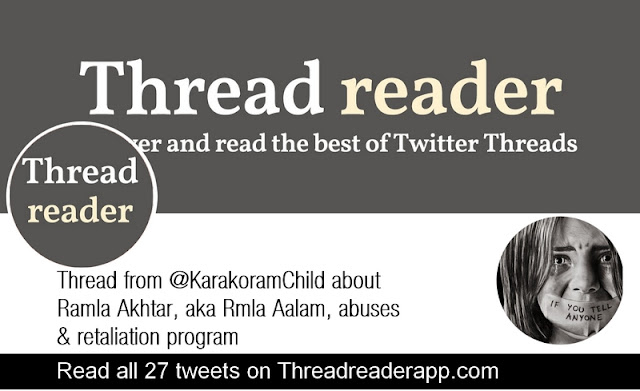 #Save the Karakoram child from abuse & neglect